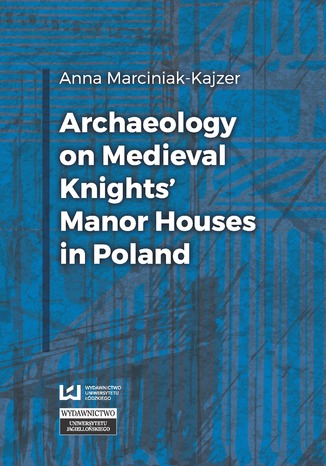 The relicts of medieval knights’ manor houses in Poland today are so called “grodziska stożkowate” (motte) - the anonymous hills having in themselves remnants of wooden buildings, exceptionally made of stone or brick and numerous tiny artifacts being the trace of the past household equipment. Unlike to the castles they are not so often visited but more often destroyed. The book presents the image of medieval knights’ manor houses, which we know due to archaeological excavations carried on for half a century. Description of buildings household equipment and movables used by the people of the past was completed by transfers from written sources which allows for better understanding the live of medieval knights’ family.

I. Author’s Preface 7
II. Foreword 11
1. Introduction 13
2. Development of Views 21
III. Archaeology and Relics of Medieval Knights’ Manor Houses 31
1. Where Did the Knights Build their Manor Houses? 33
2. Buildings within Knights’ Residences 49
3. Furnishings and Interior Fittings of Manor Houses 66
4. Other Artefacts 85
IV. An Attempt to Reconstruct the Image of a Medieval Knight’s Manor House in Poland 121
V. The Ending 147
VI. Short Bibliography for Concerning Archaeological Stes 173
VII. Bibliography 183