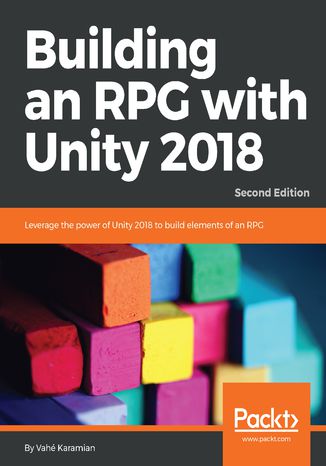 Building an RPG with Unity 2018

Build a high-end, multiplayer role-playing game (RPG) from scratch with C# and Unity 2018

In a role-playing game (RPG), users control a character, usually in the game's imaginary universe. Unity has become a top choice for developers looking to create these kinds of immersive RPGs.

Building an RPG with Unity 2018, based on building some of the most common RPG features, teaches you tips, tricks, and techniques that can be applied to your own game.

To start with, the book guides you through the fundamentals of role-playing games. You will learn the necessary aspects of building an RPG, such as structuring the game environment, customizing characters, controlling the camera, and designing other attributes such as inventory and weapons. You will also explore designing game levels by adding more features. Once you have understood the bigger picture, you will understand how to tackle the obstacles of networking in Unity and implement multiplayer mode for your RPG games.

By the end of the book, you will be able to build upon the core RPG framework elements to create your own immersive games.

What you will learn

Who this book is for

Building an RPG with Unity 2018 is for you if you are a programmer interested in developing and further enhancing your skills when developing RPGs in Unity 2018. This book does not cover the basics of Unity, and so is for intermediate or more advanced users.