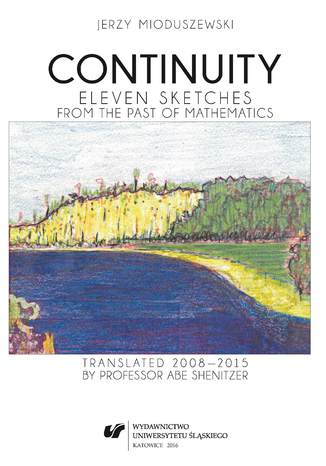 Continuity. Eleven sketches from the past of Mathematics

Kup pozycję na ebookpoint.pl
The book was written in the eighties of the last century. Being encouraged by the editorial board of monthly Delta in the person of Professor Marek Kordos, the author’s first aim was a collection of essays about Peano maps, lakes of Wada, and several singularities of real functions. But it was the time when university duties stopped and the author could freely meditate whether this curious mathematics had its roots in the forgotten past. He remembered old authors who began their books with the words “already the ancient Greeks… .”
The celebrated nineteenth century, the century of concepts, was preceded by the century of calculations. Going further back we can see Newton, but what and who was there before? Were the centuries between the Ancients and Newton a vacuum in mathematical sciences? Accidentally, the treatise De continuo by Thomas Bradwardine, the Archbishop of Canterbury, led the author into an unknown and strange world of medieval scholastic thought, showing to him the lost thread joining our times with Zeno, Aristotle and Democritus.
However, to find this forgotten link a step should be taken beyond pure mathematical thinking. In this extended surrounding we can observe the unity of mathematical concepts being non-existent in the realm of pure mathematics.

Number • On idealism in mathematics • Its two varieties: Pythagoreism and Platonism • Discovery of incommensurable segments • The Euclidean algorithm • On some possible meanings of the proportion of segments / 35

The Arab Middle Ages • Euclid’s parallel postulate: mistakes and progress • Singular features of the philosophy of nature of the Arab East / 81

The European Middle Ages • Disputes about the structure of the continuum • Oresme and the Calculators on the intensity of changes • The 1 : 3 : 5 : 7 : … sequence • The theory of impetus • Quies media • The ballistics of Albert of Saxony and of Tartaglia • Galileo • Supplements / 95

The method of indivisibles • Three ways of computing the area of a circle • Kepler: the principle of fields and a barrel • The Cavalieri’s principle • The Roberval cycloid • Need we explain it by undivisibles? • Towards magic thinking • Descartes / 123

Calculus • Derivative of xn • Barrow’s observation as motivation for this computation • The role of the Calculators • The impetum theory as motivation • Philosophiae Naturalis Principia Mathematica and the theory of fluxions • Leibniz • Voltaire on Newton • Hypotheses non fingo? / 141

A debt redeemed • The beginning of the new analysis: Cauchy and Bolzano • Weierstrass • The arithmetization of analysis • Cantor • The role of Dedekind • Set theory did not come into being accidentally • Nothing is ever completely settled / 177