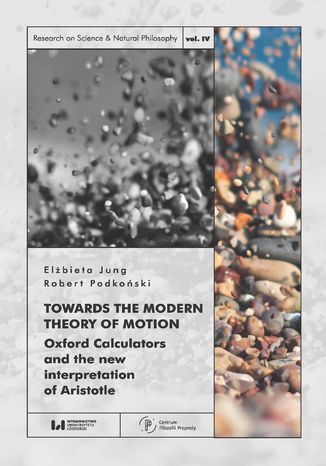 Towards the Modern Theory of Motion. Oxford Calculators and the new interpretation of Aristotle

The problem of the continuity of science from the medieval to the modern times of the 17th century, when Galileo and Newton developed the correct theory of mechanics, occupied historians of science from the beginning of the 20th century. Some believe that the fourteenth-century English scholars who created the School of Oxford Calculators and their French and Italian followers. with their solutions, laid the foundations for the development of modern physics. Others believe that medieval natural philosophy made no contribution to the development of modern science. The presented book is a voice in this discussion and an attempt to answer the question about the continuity of science. Considering how much has been discovered, edited and written about the Oxford Calculators, the book reviews and compares the results of our research with works of the other historians’ research into the intellectual heritage of these 14th century English thinkers in order to enrich and update the views on the Oxford Calculators’ natural philosophy in perhaps its most fundamental aspect – at least from the point of view of Aristotle’s philosophy – namely the subject of “science of local motion.”

The discussion are mostly focused on topics that were important to medieval thinkers and not those that could be most interesting from the modern point of view, and the research are directed on the Oxford Calculators’ tradition in science toward a prospecting of the innovative character of their teaching, and here first of all against the background of Aristotelian theories, and then the subsequent search for possible innovations which could have inspired early modern scientists.

As the conclusions of the research on the theories of Oxford calculators are still formulated mainly on the basis of analyzes of incomplete printed texts, the critical editions of Latin texts are offered. These are not only the most famous Calculators’ works, such as William Heytesbury’s De tribus praedicamentis: de motu locali or John Dumbleton’s Part III of the Summa logicae et philosophiae naturalis, but also of a hither to unknown work by Richard Kilvington, i.e., his question on local motion and the question on local motion written by the anonymous author of the treatise De sex inconvenientibus.