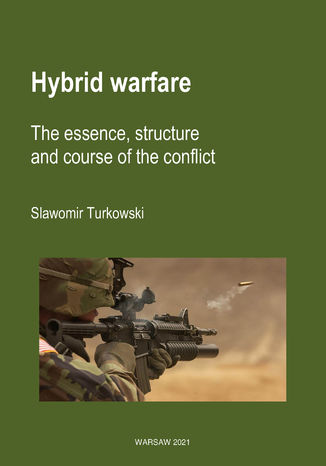 Hybrid warfare. The essence, structure and course of the conflict

Slawomir Turkowski - lawyer, graduate of the Faculty of Law at the University in Bialystok, a specialist in the field of commercial companies' law, public procurement law and energy law, advisor in energy sector companies, energy market expert. Military theoretician, military instructor, graduate of the Reserve School of the Military Academy of Rocket and Artillery in Toruń. General Joseph Bem, an officer of the Polish Army.

The book analyzes the phenomenon of hybrid wars as third-generation conflicts. The publication discusses the genesis of conflicts, the course as well as aspects related to combating these phenomena and indicates methods of prevention. The author intends to present the issues of hybrid warfare in a comprehensive manner and at the same time practical. This publication is the result of research and the author's practices in the area of asymmetric conflicts.