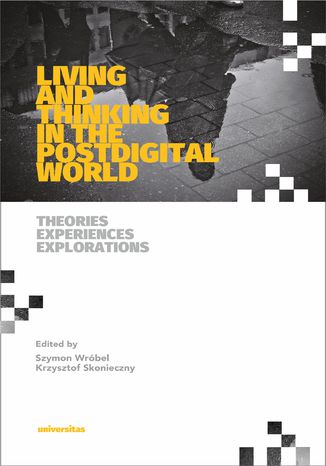 Living and Thinking in the Postdigital World. Theories, Experiences, Explorations

Living and Thinking in the Postdigital World is the result of a series of conferences organized at the Collegium Artes Liberales, University of Warsaw, as a part of the project “Technology and Socialization”. Its main aim is to interrogate the different ways in which technology – especially digital technology – shapes today’s social and political landscape in a theoretical and practical way.

The book is divided into three parts. The first one concentrates on theoretical elaborations of our current situation – testing if theories of technology that we have inherited from earlier ages are suited to our current historical moment. The second part of the book is devoted to describing novel experiences allowed by digital technologies and the intertwinement between our “online” and “offline” lives. The chapters gathered in the final part endeavor a look into the future, problematizing the consequences of currently observable trends and trying to understand the workings behind various visions of what is to come.

Two incontrovertible assets of the book are its interdisciplinary character and the subject that it addresses. It is not only remarkably timely, but also crucial for the changes undergone by the scientific disciplines it presents and our world as a whole. (…) One of the book’s strengths is the extremely wide exposition of the dynamic multiplicity and heterogeneity of the theories which endeavor to grasp the specificity of the technological and diagnose the changes that it brings to science and our understanding of subjectivity. The book can be read as an instructive introduction to theories of the postdigital world (…).

Szymon Wróbel is a full professor of philosophy at the Faculty of “Artes Liberales” of the University of Warsaw and at the Institute of Philosophy and Sociology of the Polish Academy of Sciences (IFiS PAN). He is the author of numerous books and articles scattered in various scientific journals. In 2016 IFiS PAN published his latest book Filozof i terytorium on the Warsaw School of Historians of Ideas. Currently he is the head of the experimental Techno-Humanities Lab at the Faculty of “Artes Liberales” where for several years he has been carrying out the “Technology and Socialization” project.

Krzysztof Skonieczny is an assistant professor at the Faculty of “Artes Liberales”, University of Warsaw, and a member of the Techno-Humanities Lab. He is the author of Immanence and the Animal. A Conceptual Inquiry (Routledge 2020).

Part One. Theorizing the Technological Present

“Michael Stemerowicz, The Work of Art in the Age of Its Technological Reproducibility” – A Rehearsal of Consumerism and the Aesthetic Consequences of the Dissolution of Tradition

Agata Szepe, Israeli Tourism to Poland in Social Media. Perspectives of Social Science of the Internet and the Actor-Network Theory Approach